I find it curious that while there are many online references to L. Frank Baum's early draft for The Tik-Tok Man of Oz stage show, titled Ozma of Oz, as being extant, I can find little reference to the existence of the final draft for The Tik-Tok Man of Oz. Why does no one (at least online, other than Wikipedia and me) seem to know of its substantial, albeit fragmentary, existence?

I don't know where the original script is now. The original may be in the hands of a descendant of L. Frank Baum. Or it may be in the collection of an Oz collector. I've had access to a photocopy of it for many years. It can't be the only photocopy around. Can it?

Even if it were, I've mentioned the existence of the script on this blog. And I reproduced the first page of it as an illustration in my detailed discussion of the show's history, published in the Winkie Con 50 Program Book, which has been available beyond the convention itself. I don't expect casual Oz book readers to necessarily be familiar with either my article or this blog. But anyone who writes specifically about The Tik-Tok Man of Oz ought to be.

Anyway, what prompted this post was that I recently ran across a delightful blog called Burzee. The bloggers offer their reactions to the Oz books and Baum's other fantasies. One post on the blog discusses Baum's novelization, Tik-Tok of Oz, and claims erroneously that the Ozma of Oz script is the only version of the script extant. I wrote a comment on the post to correct this, but I'm frustrated that this myth is being perpetuated, despite the easily accessible evidence to the contrary. The Burzee blog isn't the only instance of this misinformation I've seen, only the latest. Claims that the Ozma of Oz draft is the final extant version can also be found on more "scholarly" websites, such as here, here, and here (which explicitly and inexplicably states that the final version is lost).

Why do these myths take hold? You'd think a Munchkin hung himself on the MGM set or something.
Posted by ericshanower at 10:29 PM No comments:

Ilon Bergere (1871-1944) played Ozma, the Rose Princess, in The Tik-Tok Man of Oz for awhile during the post-Chicago tour. Born in Budapest, Hungary, she married businessman David Bauer of St. Louis, Missouri. When he died, Ilon pursued a stage career to support herself and her two young children. Her first role was in E. Van Alstyne's musical comedy The Broken Idol. She came to prominence on Broadway playing Mascha in Oscar Straus's The Chocolate Soldier with Charles Purcell, who later played Private Files starting in San Francisco. Ilon's pre-Tik-Tok Man career included roles in The Gay Hussars on Broadway as well as in Gilbert and Sullivan's Pirates of Penzance and The Mikado at the Tivoli Theatre in San Francisco. By 1917 she and Charles Purcell were married. She died in San Bernardino, California. Her son Monroe Bauer Purcell was a pianist for Margarita Padula and Co.
Posted by ericshanower at 3:38 PM No comments:

Biographies of the cast of The Tik-Tok Man of Oz are now online. To see them, click the BIOS link on the menu bar above or click here.

I had gathered bios and headshots to print in a handsomely designed program for the performance on August 9, 2014. But time slipped through my fingers. The night before the show I whipped out a minimal program that would suffice, but bios and photos didn't make it in. I promised myself to publish them all on the website, so here they are.
Posted by ericshanower at 5:08 PM No comments: 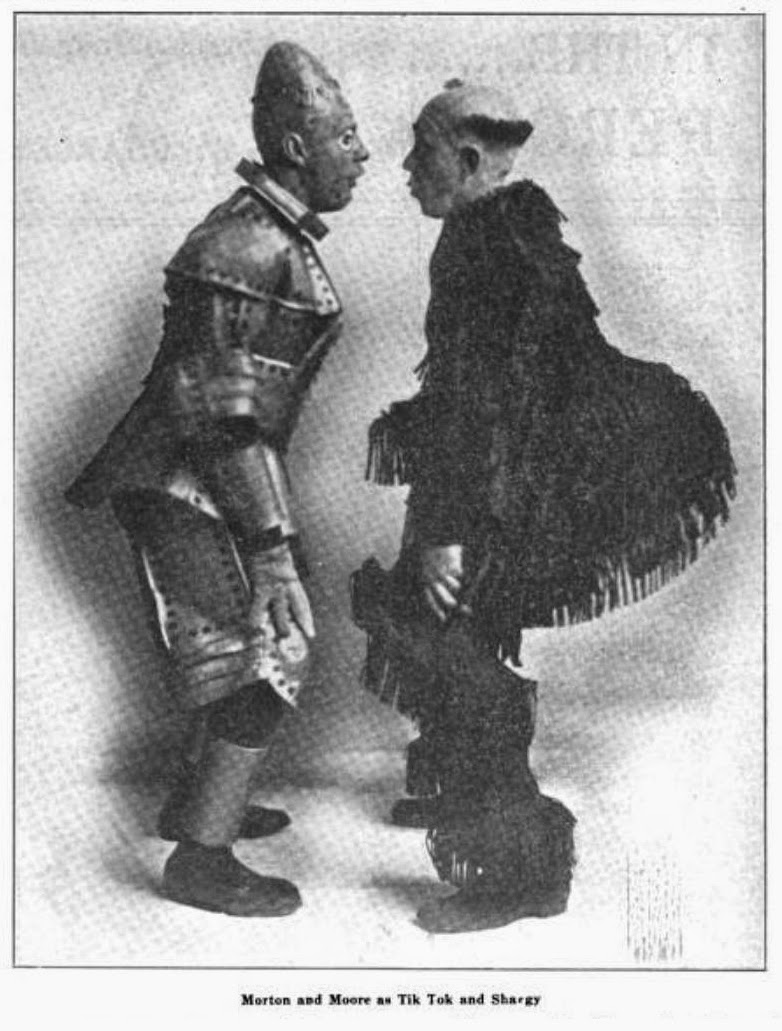 This partially reconstructed list of the performance schedule of The Tik-Tok Man of Oz during its original ten-month production in 1913-14 is expanded from research begun by Evan McCord and Patrick Maund. The following list incorporates additions and corrections to the list of touring dates for the show included as a sidebar to my article "Guaranteed for a Thousand Years" in The Winkie Con 50 Program Book. Further additions and corrections are welcome. I'll add them as I receive them.

UPDATE: The following information has been supplemented according to  research by Scott Cummings.
Citation: Cummings, S. "The Tik-Tok Man of Oz 1913-14 Tour Dates" in The Baum Bugle, vol. 58, no. 3 (Winter 2014). San Francisco: The International Wizard of Oz Club, Inc., p. 40.

UPDATE: Performances added, some corrections made.


These dates and theaters were originally scheduled and announced, then cancelled:

Corrections to the Program Book Essay

For The Winkie Con 50 Program Book I wrote an article, “Guaranteed for a Thousand Years,” that covers the history of L. Frank Baum's 1913 musical The Tik-Tok Man of Oz from the earliest news reports in 1907 through rehearsals for Clockwork Productions's 2014 staging. The article appears on pages 113-72. It contains a number of errors. I've noted them below with corrections.

“Guaranteed for a Thousand Years” by Eric Shanower
Errata

Page [126], column one, line nineteen: for “tiger were added.” read “tiger were added—although a tiger appears in at least one photograph that seems to be from the earlier March 1913 rehearsal period.”

Page 153, column one, lines eleven and twelve: for “Sieze Her!, and supplementing it with musical themes from The Tik-Tok Man of Oz.” read “Sieze Her!”

Page 159, from the Dance Ensemble at the bottom of the page, eliminate: “Ana Mendoza”

The Music of The Tik-Tok Man of Oz


One primary goal of reviving Baum and Gottschalk's vintage stage musical The Tik-Tok Man of Oz was to give audience members the chance to hear all the surviving musical numbers in performance. Fourteen songs for the show with lyrics by L. Frank Baum and music by Louis F. Gottschalk survive. One instrumental piece by Gottschalk survives. Three songs written for the show with lyrics by Oliver Morosco and music by Victor Schertzinger survive. One song written by Victor Schertzinger survives. These nineteen numbers were all part of the performance on August 9, 2014.


Two of the commercially released selections of Gottschalk music from The Tik-Tok Man of Oz were performed as well. The main "Selection" served as the Overture. The "Lanciers" served as the Entr'acte.

At least twelve musical numbers from the original 1913-14 production are not known to survive. Gottschalk's music for "A Storm at Sea" is one that's gone. To fill this hole, "Bacchanal Dance" by Gottschalk from his unproduced score for Julius, Sieze Her! was substituted, modified by musical director Joseph Grienenberger to fit the action of The Tik-Tok Man of Oz Prelude.

No finale survives for either Act One or Act Two. For the Act One finale, lyrics by L. Frank Baum in the earliest existing script for the show, a version from 1909, were slightly modified by Eric Shanower to fit a combination of music from "Ask the Flowers to Tell You" and "The Army of Oogaboo." For the Act Two finale, the chorus of "The Magnet of Love" was reprised by the entire company.

Beyond the fourteen surviving songs with lyrics by Baum, many other Baum lyrics survive in the 1909 version of the script. With one exception these do not have music and it's unclear whether any of them were used in the original 1913-14 production. They were not performed in this production. The one exception is "Fight for Oogaboo" with lyrics by Baum that clearly fit Gottschalk's music for "The Army of Oogaboo." Although "Fight for Oogaboo" was performed in the original production, it was not performed in this.

Two known interpolations to the original production—"Forgotten" with lyrics attributed to Flora Wulschner and music by Eugene Cowles, and "One, Two, Three, It's All Over Now," lyricist and composer unknown—were not included in this performance.

Baum's lyrics for Tik-Tok's verse in "Folly!" are racially insensitive. Eric Shanower revised them for this production to eliminate mention of an African native eating a missionary.

Listed here are the musical numbers performed in Clockwork Productions's The Tik-Tok Man of Oz. Joseph Grienenberger was the musical director and played keyboard for the performance. Unless otherwise noted, Grienenberger—working from piano/vocal sheet music—orchestrated the music for Michael Fowler (trumpet), Fred Allee (drums and percussion), and Rafael Estrada (double bass).

“A STORM AT SEA” (Gottschalk, arranged from manuscript by Joseph Grienenberger) – Dance of WAVES and STORM-AT-SEA BETSY

“THE MAGNET OF LOVE” (Baum/Gottschalk) – BETSY


“OH MY BOW” with Dance (Baum/Gottschalk) – POLYCHROME; Dance of POLYCHROME  and RAINBOW GIRLS

“I WANT TO BE SOMEBODY’S GIRLIE” (Schertzinger) - POLYCHROME

“ASK THE FLOWERS TO TELL YOU” (Baum/Gottschalk) – OZMA and FILES; Pas de deux

“WHEN IN TROUBLE COME TO PAPA” (Baum/Gottschalk) – RUGGEDO and POLYCHROME

“JUST FOR FUN” (Baum/Gottschalk) – OZMA and FILES; Dance of ROSES

Posted by ericshanower at 2:14 PM No comments:

Clockwork Productions's presentation of The Tik-Tok Man of Oz performed on August 9, 2014, as the Saturday evening program of Winkie Con 50 at the Town and Country Hotel, 500 Hotel Circle North, San Diego, California, for an audience of about two hundred and fifty.

Preparations continued up until the last moment—I was hanging mirror-ball fruit onto the metal forest trees for Act 2, Scene 2, just an hour before the performance began. The show was a triumph, due to the efforts of all involved. Appreciative comments from the audience afterward focused on the performance of ten-year-old Alyson Stein as the gymnastic Royal Gardener and on the beautiful voices of the principal singers—Tamara Rodriguez as Polychrome probably was mentioned most often. The audience took favorable notice of  Eduard Cao's comic timing as the Shaggy Man. Chris Boltz's lighting as well as Eric Shanower and David Maxine's costumes also garnered praise. Negative reaction was primarily reserved for L. Frank Baum's script.


Final credits for this production of The Tik-Tok Man of Oz:

I'd also like to thank: Infinity Dance Arts, 1075 Broadway, El Cajon, California, for generously donating audition and rehearsal space and loaning some costumes and props; Ellen Joy Weber, Candice Hooper, and Christian Esquevin of the Coronado Public Library in Coronado, California, for loaning a prop; Freddy Fogarty for giving permission to publish his photos, for which he reserves all rights, on this post; and all donors who are listed here.

Posted by ericshanower at 3:55 PM No comments: